GDP expected to grow above 5% in 2016 due to robust private consumption, but the business environment remains difficult. 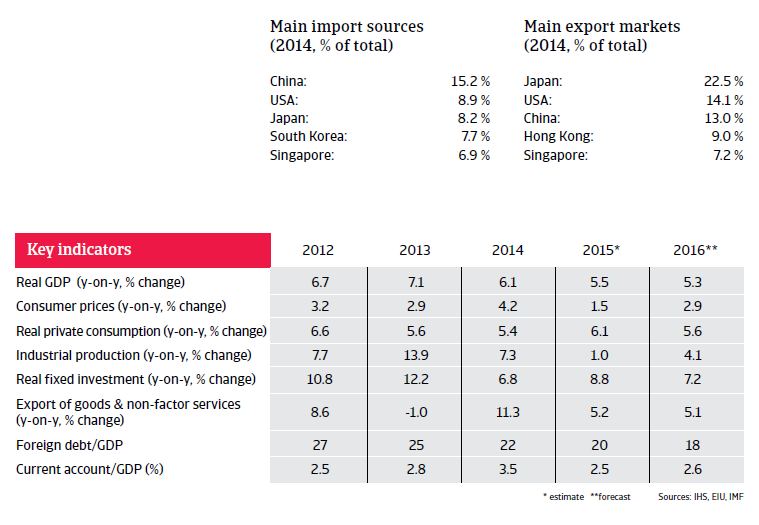 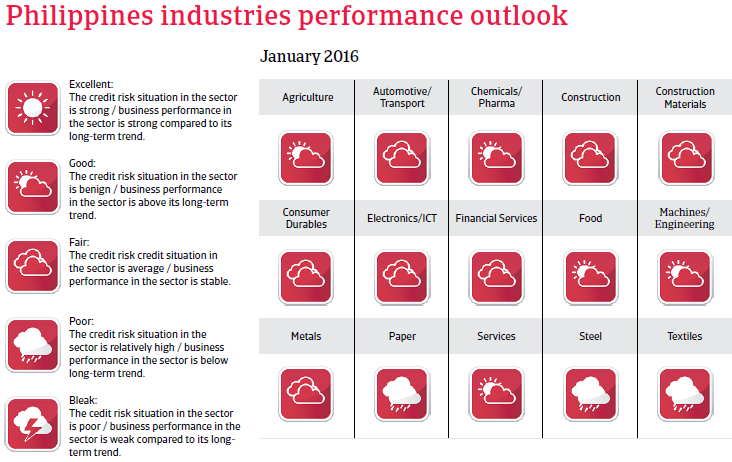 Government type: Presidential republic. The Philippines' constitution is strongly inspired by the US constitution.

Presidential and general elections due to be held in May 2016

Although the Philippines have traditionally been quite politically volatile, the situation has improved markedly under the current president, Benigno Aquino, whose Liberal Party-led coalition controls a majority in the Lower House and is favoured by most of the population. As the country's constitution bars presidents from serving two consecutive terms in office, Aquino cannot run for another term in the May 2016 presidential elections.

Relations with China have deteriorated since 2013, due to Beijing´s growing assertiveness in the South China Sea. China has repeatedly seized islands claimed by Manila and Chinese ships have blocked supplies to Philippine garrisons in the contested area. The Philippines has regularly tried to convince its ASEAN peers to take a tougher diplomatic stance against China in the South China Sea conflict, with mixed results so far. Against Beijing´s resistance Manila has finally brought the case to the Permanent Court of Arbitration (PCA) in order to clarify the legality of China's claims under the United Nations Convention on the Law of the Sea (UNCLOS). In October 2015, the PCA ruled that it has jurisdiction over the case. 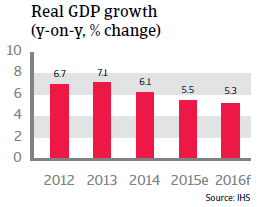 Since 2012, economic growth has been persistently high, driven mainly by private consumption which accounts for about 70% of the economy. Growth has also been sustained by rising demand for Philippine exports such as electronics.

In 2015 and 2016 domestic demand is expected to remain robust, while weaker exports will lead to slightly lower growth rates than in previous years (about 5% per annum in 2015 and 2016). However, despite robust domestic demand, economic expansion is still hampered by a difficult business environment, with corruption and poor infrastructure impeding investments. Necessary rail networks, ports, roads and airport developments have all faced delays, and poor infrastructure drags on higher economic growth. The outgoing Aquino administration has recently started to speed up the launch of public works and infrastructure projects before his term ends in early 2016. 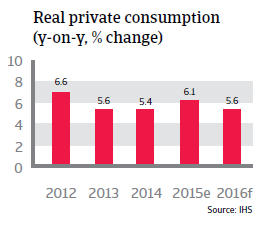 Inflation is under control, and decreasing oil prices may even lead to lower inflation than currently forecast. This would give a further boost to consumer spending. Public finances are healthy, supporting continued government spending.

Consolidation has helped the Philippine banking sector to remain healthy. Banks are largely financed by deposits, making them more resilient to tighter credit conditions in the wholesale credit market. Traditionally, banks have been reluctant to lend to the private sector, leading to structural underinvestment.

The external macroeconomic situation is robust, with manageable foreign debt (18% of GDP; 65% of exports of goods and services expected in 2016) and ample liquidity. The current account is structurally positive due to the inflow of remittances from overseas workers. External financing requirements are low and international reserves amount to more than 15 months of import cover.

Top eight most promising markets of 2016

Atradius picks the top 8 markets for business opportunities in 2016. These emerging markets have been showing strong performances over the past three years and are expected to improve further in 2016.

Global economic growth is expected to be sluggish in 2016. Bankruptcies remain high in the eurozone and are rising in key emerging markets.

The slowdown in world trade: temporary or permanent?