UK trade is facing a double whammy from Brexit and Covid-19, putting particular strain on trade with the EU.

United Kingdom trade is facing an unprecedented mix of challenges. The health crisis and associated lockdown spurred by the pandemic caused demand, both at home and abroad, to plummet. Border disruptions due to health checks and travel restrictions limited UK-EU trade while business disruptions contributed to volatility in data collection. This came at a time of rising uncertainty surrounding the future trade relationship with the EU. The Trade and Cooperation Agreement (TCA) signed between the EU and UK in the final hours of 2020 offered some more optimism for the 2021 outlook. Goods are allowed to continue being trade freely, but non-tariff barriers in the form of customs bureaucracy and regulatory uncertainty are disrupting UK-EU trade. In this research note, we dive into the latest UK trade statistics to determine just how much.

UK’s share of trade with EU continues to decline

UK trade is dropping at historically high rates, contracting 14.3% y-o-y in the 12 months leading to March 2021. Exports performed the weakest, dropping 17.4% y-o-y, compared to the 11.8% drop in imports. A clear turning point in the contraction of trade appears to have been reached in January 2021, as shown in figure 1. This marked the first month under the new trading relationship as well as the coming-into-force of the third national lockdown. 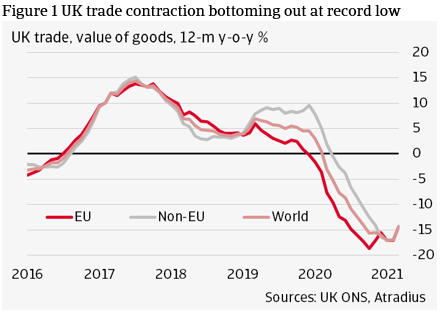 Trade with the EU contracted at a higher rate through most of 2020 than trade with the rest of the world. Demand in the EU was severely affected by measures to combat the coronavirus, but given the significantly higher magnitude of trade contraction, it also suggests that Brexit uncertainty played a significant role. In December, the downward trend in EU trade changed course in line with stockpiling ahead of the end of the transition period. In the first three months of 2021, UK trade growth with the EU has been more-or-less the same as that with non-EU member-states. Total trade growth has begun turning up from a low of -17.1% in January as base effects come into play and confidence improves.

As there’s only one quarter of data since the free-trade agreement between the EU and UK was signed, there is one notable development. Q1 2021 is the first quarter since records began that the value of imports from outside the EU surpassed that of the EU, totalling 51.1% of UK imports. The EU’s share in total UK imports has fallen some five percentage points since early 2018 while the share in exports has declined four percentage points to 45.6%.

Trade with EU affected significantly more than with non-EU

Trade between the UK and European Union has dropped to levels unseen since early 2016. Figure 2 presents the overall goods trade index divided between trade flows with the EU and non-EU. Trade with the EU and outside the EU increased at similar rates until 2018. As Brexit uncertainty increased and trade growth with the EU began to slow, trade with the rest of the world continued to grow. The divergence grew as extra-EU trade accelerated in late 2018 and continued to grow, albeit at a slower rate, through 2019 as EU trade stagnated. 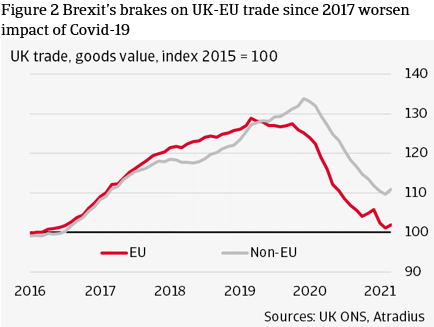 The strong contraction under Brexit and Covid-19 is driven in nearly equal parts by the EU and rest of the world. Of the 14.3% contraction in total UK trade in the last year, 7.1% is due to trade with the EU. Considering this is nearly equal to the 7.2% contribution of extra-EU trade to the decline, it is clear that the pandemic’s effect on UK international trade is larger than that of Brexit right now. Moreover, the steepness of the drop in trade levels seen in the first months of 2021 is clearly larger with the EU.

We can also compare the current level of UK trade with trade levels before sharp Brexit uncertainty and the coronavirus pandemic. This shows a significantly larger impact on overall trade with the EU than the rest of the world, suggesting there is more at play than the pandemic. Comparing the past 12 months’ trade performance to 2018, we see that UK-EU trade is 18.9% lower, while trade with non-EU countries is only 9.1% lower. 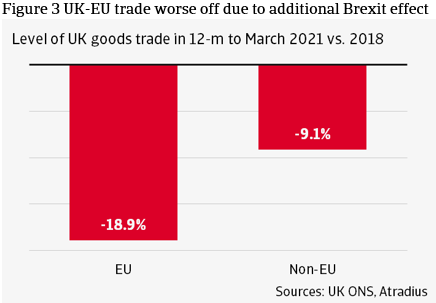 2018 is taken as a year with which to compare current levels as it’s the last year before key Brexit deadlines began contributing to volatility. Looking at UK export and import flows with the EU in figure 4 we can see steady growth through 2018, albeit slowing and diverging. Export growth began outpacing import growth, in part driven by exchange rate fluctuations. The triggering of Article 50 on 27 March 2017, formally beginning the withdrawal process, drove up uncertainty, weighing down the value of sterling. 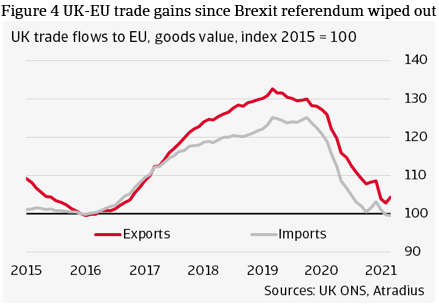 In 2019, volatility increased as anticipated deadlines came and went and trade with the EU moved rather flatly. Trade gains between the EU and UK made since 2016 have all but been wiped out though in 2020. This steep decline lines up with the run-up to the end-2020 deadline to the transition period. At this point, it is evident that uncertainty alone plays a larger role in reducing trade than the changing trade regime itself. High uncertainty surrounding the future trade agreement contributed to lower investments overall (a highly trade-intensive component of economic activity) and shifting of supply chains away from international systems weighing further on trade.

In line with these challenges, overall UK trade fell 16% in Q1 compared to Q4 2020. Trade with the EU, which covers now just under half of total UK trade, fell by 22.4%, with sharp declines across its largest trade partners. The contraction in trade with the EU is broad-based across partner countries. Figure 5 shows trade growth between the UK and the five most important trade partners in the EU. The UK’s largest trading partner in the EU is Germany, accounting for nearly a quarter of total bilateral goods trade. UK trade with Germany fell 22.4%. Trade with France, the UK’s third largest EU trade partner, is experiencing the most severe contraction in trade, 26.1%. Trade with Ireland contracted the most sharply with a 37% drop. The value of exports to Ireland dropped 42.7%. This is a large Brexit effect with some stockpiling effects at play here in Q4 2020, particularly in exports of chemicals and pharmaceuticals. 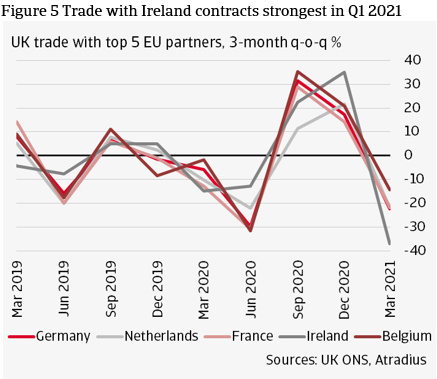 The British Chambers of Commerce’s 2021 Q1 Economic Survey reports 41% of companies have reported decreased sales in Q1. Export sales are historically low and deteriorating. Retail and wholesale firms for example saw their exports drop 60%. Aside from volatile trade figures, it is evident that firms are grappling with higher expenses, such as supply chain delays in the manufacturing sector. According to the latest Business Insights and Conditions Survey from the ONS, the most common challenge for both importers and exporters is additional paperwork.

A sectoral breakdown of annual export growth is drawn in figure 6, showing that the overall drop in trade is led by fuels. Fuels exports fell 37.6% y-o-y in March, with the exports to France and Germany in particular leading the decline. In terms of value though, fuels exports totalled GBP 14.2 billion, 10% of exports to the EU.

The largest export sector to the EU is machinery & transport equipment. Accounting for one-third of UK exports to the EU, the sector’s 19.8% contraction is the primary driver of the drop in total exports to the EU. On top of the lack of tariff and quotas, the sector’s transition is aided further by a grace period on rules of origins to end-2021. This clouds the outlook however for recovery. Non-tariff barriers’ impacts on supply chains increases the costs though for the industry. Regulatory uncertainty also continues to weigh on trade, such as for instance aviation safety regulation. Supply chain concerns and higher non-tariff barriers negatively impact manufacturing firms too. 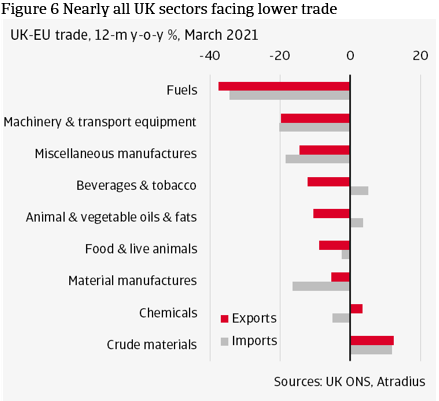 UK chemicals exports are outperforming most other sectors with a 3.4% expansion over the past year, but imports from the EU are down 5.1%. An additional negative effect of Brexit on top of the increased paperwork at play here is the rules of origin clause in the TCA. UK-EU goods trade is only tariff-free if at least 50% of the value of the goods is created in the UK or EU. With large cross-border supply chains in the chemicals sector, proving this can be a headache for some trading companies and increases the costs of trade.

It is clear that UK trade has been rattled by both Brexit and, even more intensely, Covid-19, but there is a notable impact that can be attributed to Brexit. Trade with the EU in Q1 2021 fell much more sharply than that with the rest of the world when comparing to Q4 2020, the final months of the UK’s transition period. Furthermore, comparing current trade levels to those before volatility surrounding either event shows a much more substantial decline in trade with the EU than non-EU countries. While it’s too soon to determine the direct causal link, it is clear that challenges to trade between the EU and UK associated with Brexit are exacerbating the already-weak trade environment wrought on by the global pandemic.

Climate change and its impact on country risk

2021: A turn of the tide in insolvencies

As fiscal support is gradually phased out, global corporate insolvencies are forecast to increase by 26% in 2021

German industries performance: metals and steel up one notch, but still elevated credit risk for many automotive and machines businesses.