Despite improvements in 2018, respondents in Slovakia reported an increase in DSO and 27.5% of businesses seem to have been impacted by late payments.

According to the Atradius findings, 2018 is the third consecutive year in which Slovakia increased its proportion of B2B sales made on credit. Respondents here reported late payments less frequently, a much lower proportion of past due B2B invoices than one year ago and a faster invoice to cash turnaround. However, despite improvements, there was an increase in DSO and 27.5% of respondents reported that their businesses have been impacted by late payments.

A steep increase in credit sales

Together with their peers in Hungary, respondents in Slovakia are the most inclined to sell on credit terms in 2018. In contrast to Hungary, where the proportion of total B2B credit sales dropped this year, respondents in Slovakia increased their credit sales significantly. This is the third consecutive year with an increase, and the average proportion of B2B sales made on credit reached 47.5% in 2018 after 30.5% in 2017. Slovakian respondents however are clearly less comfortable selling on credit to foreign B2B customers than to domestic B2B customers (44.1% and 50.9% respectively)

Based on the survey findings, domestic credit sales are mostly to reward long-term business relationships and to attract new customers. Considered common practice in Slovakia, credit sales are also seen as a way to access the market and as a means to facilitate sales. Poor payment behaviour is the main reason for 21.1% of respondents to refuse credit terms.

We trade on credit with our domestic B2B customers because we have a good relationship and we trust them.

The main reasons for granting trade credit to foreign B2B buyers mirror those of domestic B2B customers - to reward loyal customers and to attract new business. The lack of information on the customer’s business or payment performance would cause respondents in Slovakia to refrain from selling on credit to their foreign B2B customers (mentioned by 12.8% of respondents).

We trade on credit with our foreign B2B customers because of their good payment behaviour.

In 2018, the proportion of overdue B2B invoices in Slovakia dropped significantly by almost 17 percentage points. More specifically, from 41.5% in 2017 to a low 25.1% this year. This is by far the biggest change in the region and one of the lowest proportions of past due B2B invoices across the Eastern European countries surveyed. 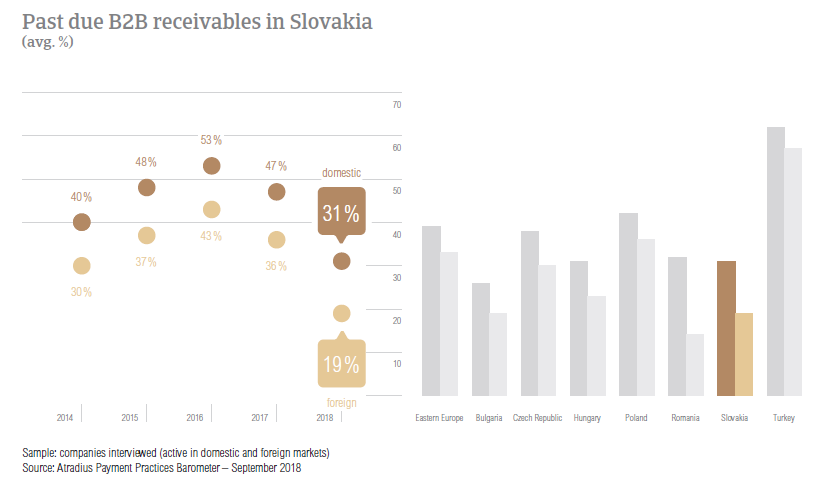 After a slight decrease from 39 days in 2016 to 38 days in 2017, the average Days Sales Outstanding (DSO) figure increased again this year to 43 days. This may be due to an increase in payments made more than 90 days past the invoice due date by both domestic and foreign B2B customers. 19.8% of Slovakian respondents said that they foresee a slight increase in their company’s DSO in the coming 12 months. The majority of respondents (72.6%) however, do not expect any changes.

A faster invoice to cash turnaround 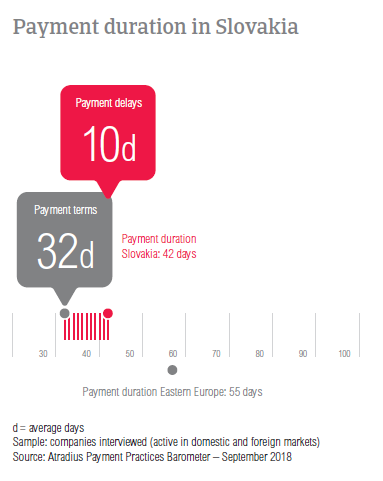 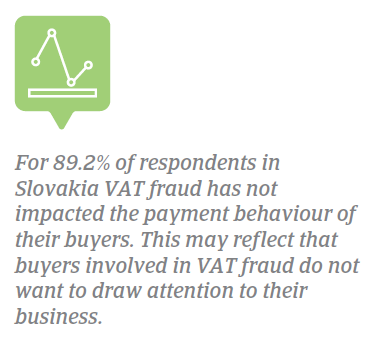 Looking at the main reasons for payment delays by foreign B2B customers, 61.3% of Slovakian respondents reported buyers using outstanding invoices as a form of financing. The percentage of respondents stating this almost doubled compared to 2017 (32.0%) and is by far the highest in the region. The second most frequently reported reason for payment delays from B2B customers abroad is insufficient availability of funds, cited by 32.3% of respondents. 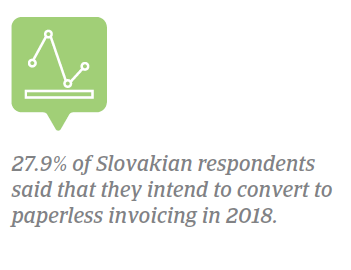 58.1% of Slovakian respondents said they don’t believe e-invoicing has a noteworthy effect on payment duration. 41.9% said that e-invoicing led to faster payments by their B2B customers. No respondents experienced a slowdown in payments after invoicing online.

Slovakia also worried about US protectionism and China’s ‘hard landing’ 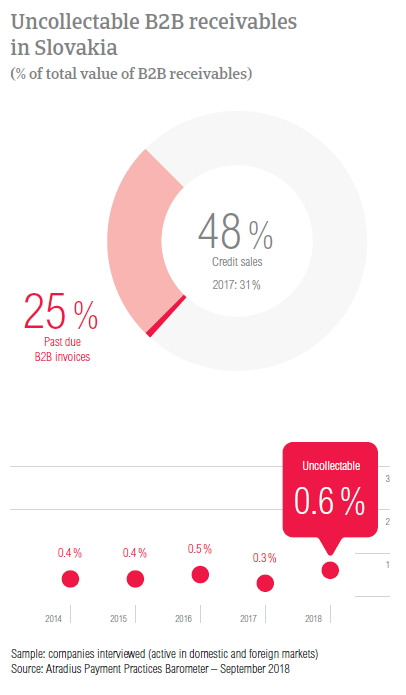 Slovakian respondents struggling with bankruptcy the most

Uncollectable receivables originated most often from B2B customers in the chemicals, construction, consumer durables, machines, transport and services sectors. The main reason for write-offs is the same as the one reported in all the other Eastern European countries surveyed - the customer going bankrupt or out of business – mentioned by 76.4% of respondents. Slovakia had the highest percentage of respondents in the region to mention this. The second most frequently mentioned reason for write-offs was the inability to locate the customer (cited by 23.6% of respondents).

Optimistic about their buyers’ payment behaviour in the coming 12 months

In 2018, B2B customers in the metals and transport sectors enjoyed longer average payment terms (51 days and 41 days respectively) than the country average of 32 days. In contrast, B2B customers in business services are being asked to pay much faster (on average, within 23 days). 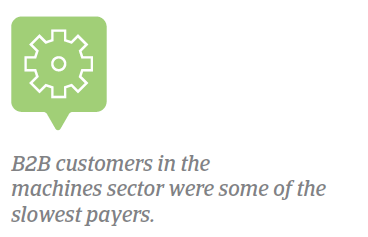 Payment duration in the Slovakian automotive sector ranges from 45 to 90 days, and the payment experience has been good over the past two years.

Despite a minor decrease in overdue B2B invoices, 45.0% of businesses in Eastern Europe reported having to manage the negative impact of payment delays.