2019 to see first increase of insolvencies since crisis

After nearly a decade of sizeable annual improvements in the number of corporate insolvencies in advanced markets, 2019 is expected to mark the first year of insolvency growth since the global financial crisis. This roughly follows the global economic cycle which appears to have peaked at 3.0% in 2018, supported by still loose financing conditions and significant fiscal stimulus in the US. As the world economy reached its fastest expansion since 2011, the business environment already began weakening. Insolvencies across advanced markets fell only 2% last year. Rising uncertainty surrounding trade and monetary policy in particular caused a worse-than-expected performance of insolvencies in the last months of 2018. In 2019, this loss of momentum is set to persist. With the world economy forecast to grow only 2.7% in 2019, we forecast an increase of 1% in insolvencies for advanced markets, marking the end of this recovery cycle. 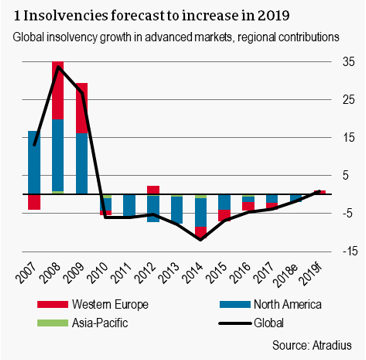 The aggregate growth in insolvencies is almost exclusively driven by Western Europe (+2%). Asia-Pacific is also expected to see a 1% increase but this is barely reflected in figure 1 due to the region’s relative GDP. We forecast zero change in North America. At the country level, our forecasts for 2019 are broadly balanced. Four countries including the UK and Italy are expected to see a significant (greater than 2%) increase in corporate failures compared to five countries expected to see a significant decrease. Aside from Spain and Greece, the reasons for decreases are largely negative base effects from 2018 as opposed to signs of economic optimism. Most countries’ outlooks fall into the stable category, even as economic growth in advanced markets is slowing nearly across the board. This is in part due to the pivot to more dovish stances from central banks, led by the US Federal Reserve. The pause in monetary tightening as most central banks remain in accommodative position should cushion the impact of lower global economic growth for businesses. Trade policy uncertainty on the other hand persists while political uncertainty at the national level (ie. France and Italy) or regional level (Brexit) could insolvencies to increase even more in 2019. 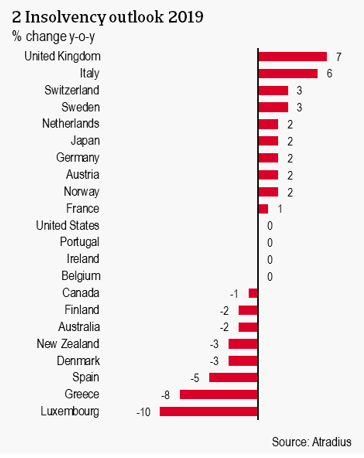 The outlook for the eurozone economy has deteriorated significantly following a much weaker than expected H2 of 2018. Loss of momentum is in part due to the weaker external environment – namely higher trade policy uncertainty and slower world trade growth – but there are also domestic drivers. In particular, Germany, the eurozone’s powerhouse has disappointed, closing 2018 with no growth after a contraction in Q3. Country-specific political and social tensions also strained growth levels. Overall, the eurozone economy only expanded 1.8% last year compared to 2.5% in 2017. This loss of momentum was reflected in the deceleration of insolvency improvements to -2% last year from -4% the year before.

Lower growth in the eurozone is not expected to be temporary, bringing 2019 GDP growth forecasts down to 1.4%. Business confidence has deteriorated significantly and uncertainty is weighing on investment, particularly in export-oriented sectors. While the ECB’s latest bank lending survey points to higher risk aversion contributing to slightly tighter credit conditions for firms, credit standards remain historically accommodative supporting loan growth. This trend is expected to continue in Q1 and to increase amid a more uncertain backdrop. As a result,  1% growth in insolvencies projected for the eurozone in 2019, the first year-on-year increase since the bloc’s debt crisis.

The increase in eurozone insolvencies is expected to be led by Italy, where we anticipate a 6% increase in the number of business failures. Italy entered a recession in H2 of 2018, driven by negative domestic demand. Industrial production contracted 1.1% q-o-q in Q4 and the composite PMI is worsening in negative territory. The fragile economic outlook continues to be clouded by political volatility, undermining confidence in public finances and the banking sector recovery. As a result, credit conditions have been worsening: since the start of 2018, the three-month moving average of new credit to non-financial corporations has been decreasing and the ECB’s Q4 bank lending survey points to further tightening in 2019. On top of economic stagnation, we expect this to translate to a 6% increase in insolvencies.

The magnitude of improvements seen across economies like France, Germany and the Netherlands has already moderated in 2018 and is forecast to enter positive territory in 2019.

In France, only a 1% decrease in the number of corporate failures is estimated for 2018 which we expect to flip to a 1% increase this year. As France’s GDP growth stagnates at 1.5%, the corporate outlook is increasingly strained by supply constraints in terms of labour supply and production capacity. The weaker external environment, and trade policy risks especially for the automobile sector, next to domestic protests also contribute to deteriorating business sentiment.

Germany is also highly vulnerable to the slowdown in world trade and possible imposition of US car tariffs. Business investment growth is forecast to slow to 2.8% from 3.1% in 2018 due to global trade uncertainty and labour supply constraints weigh on the construction sector. This feeding into an expected lacklustre GDP growth of 1.3% this year and a 2% increase in insolvencies.

The downward insolvency trend in the Netherlands is expected to reverse in 2019 as well. While domestic demand remains robust, economic slowdowns in France and Germany (which together account for more than 30% of Dutch exports) and global trade uncertainty are weighing on exports. With a 2% increase in insolvencies forecast, we project 4,288 Dutch companies to become insolvent, only 54% of its pre-crisis level.

Some eurozone member-states are bucking the trend of stagnating or increasing insolvencies in 2019. Luxembourg is forecast to experience the strongest improvement, -10%, but this is an adjustment following a 28% increase last year (largely of companies in the finance and insurance sector with no employees). Greece’s economy grew 2.2% in 2018, its strongest outturn in over a decade, and momentum is expected to continue into 2019 with GDP growth moderating only slightly to 1.9%. Internal political uncertainty ahead of the September 2019 elections may pose a downside risk to our outlook, but private consumption is increasing along with investment, albeit from a low base. We expect this to support an 8% decline in insolvencies there. In Spain, the economy is expected to grow 2.3% with strengthening employment growth driving stronger consumption, providing some insulation from the external headwinds. With the level of annual insolvencies still exceeding 4.5 times their pre-crisis levels, we expect this economic backdrop to be supportive enough to continue a downward trend in insolvencies (-5%).

UK to lead increase in the rest of Western Europe

The outlook for the rest of Europe surveyed is also increasingly gloomy. Western Europe as a whole, including the eurozone, is expected to be the worst performing region in 2019 with a 2% increase in insolvencies. This upward trend will be led by the United Kingdom where we predict a 7% increase in corporate bankruptcies, following a substantial 10% increase in 2018. This outlook has worsened from the 4% we previously forecast following a sharp loss of momentum in late 2018 into 2019. Brexit-related uncertainty is clearly beginning to bite as reflected by four consecutive quarters of contractions in business investment in 2018. The postponement of investment decisions has large ramifications for smaller firms down the supply chain. This is most severe in the retail and construction sectors and is set to continue through the coming months, as business and consumer sentiment are relatively low. The negative insolvency outlook is based on an orderly Brexit on March 29th followed by a smooth transition. As this is increasingly uncertain, the downside risk to our forecast is high.

In the Nordics, Denmark is expected to see the largest decrease in non-eurozone Europe with a 3% decrease in insolvencies projected. While the export-dependent country is vulnerable to the weaker external environment, the domestic economy is strengthening, supported by a tight labour market, low inflation, and an accommodative monetary stance. Sweden and Norway on the other hand are projected to see slight increases in insolvencies of 3% and 2% respectively. This is largely due to upward carry-over effects from large increases in 2018.

The economic outlooks for the United States and Canada are diverging but both are expected to see relatively stable insolvency levels in 2019. Corporate bankruptcies in Canada are forecast to decline only 1% as economic growth slows to 1.4% from 2.1% in 2018. The slowdown is quite broad-based with weak business investment, high interest rates, slowing oil output, and the implementation of a carbon tax among other factors. However, there are some measures that offset the negative impact for Canadian corporates. New federal tax measures have been taken to spur investment and the expected implementation of the USMCA this year should support exports.

US bankruptcies are forecast to stay at current levels, just below 80% of pre-crisis levels, supported by solid economic growth. After a rocky start to the year, the Federal Reserve’s announcement to pause monetary policy normalisation and progress in trade talks with China, in line with the end of the government shutdown, helped calm markets. Business confidence remains reasonably positive and the labour market is very tight, offering a stable outlook. While the Fed’s change in policy offers relief for US firms, risks to the business outlook are still high. Trade policy uncertainty and general policy uncertainty, especially under the split Congress, could weigh on investment. Furthermore, with the Fed’s policy rate already tighter at 2.25%, high levels of corporate debt, and the fading out of fiscal stimulus, the operating environment for corporates is expected to become more challenging in H2.

We forecast a 1% increase in insolvencies in Asia-Pacific with small improvements in Australia and New Zealand partially offsetting an increase in Japanese business failures. In Japan, insolvencies are forecast to increase 2% and remain at historically low levels. Despite improving business sentiment, the outlook is strained by lower exports related to China’s economic slowdown and trade uncertainty and the consumption tax hike slated for Q4.

Insolvencies in Australia are forecast to drop 2%, bringing it almost in line with 2007 levels. While the Australian economy is losing some steam, the weak Australian dollar, mining sector growth, and increasing LNG capacity are contributing to stronger business sentiment. The construction sector outlook however is weaker than other sectors due to lower residential demand and the completion of large projects. Overall risks associated with China as well as some domestic policy uncertainty ahead of elections in May could cloud this outlook. Corporate bankruptcies in New Zealand are expected to decrease 3% in 2019, supported by high business and consumer confidence, and a weaker New Zealand dollar boosting exports and tourism. The positive outlook for New Zealand is also vulnerable to Chinese growth and slower global trade as well as dairy prices.

The bright outlook presented in May has proven true but clouds are quickly gathering on the horizon. In an increasingly uncertain environment, there is no room for policy mistakes.

The UK leaving the EU without a deal would be a major disruption, causing business insolvencies to be higher in the UK and EU27.

Despite increasing clouds on the horizon, there remain several bright spots for export opportunities in emerging markets.