Based on the likelihood that Widodo will continue as president, at Atradius we believe the economic outlook for Indonesia is relatively positive.

The official outcome of Indonesia’s recent general election may not be known until later this month,1 but the country’s economic prospects remain positive, thanks mainly to strong domestic demand and relatively low levels of debt.

Indonesia’s election has been called the world’s most complicated single-day ballot with around 193 million citizens eligible to vote across 800,000 polling stations.2 Yet the vote was completed in a single day and most early counts point to a victory for incumbent president Joko Widodo.3 If that is indeed the outcome, it would mean policy continuity with further economic reforms and a focus on infrastructure investment. However, if the opposition leader Prabowo Subianto rejects the final results, or the margin between the two parties is very small, this could lead to political unrest. 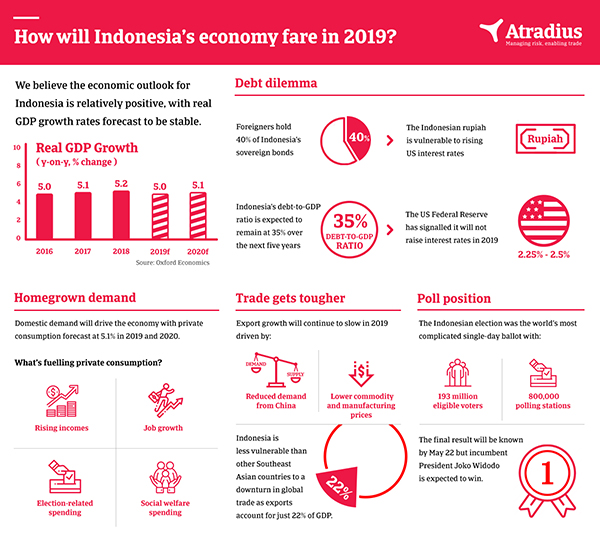 Based on the likelihood that Widodo will continue as president, at Atradius we believe the economic outlook for Indonesia is relatively positive. Real GDP growth rates are forecast to be 5% in 2019, and 5.1% in 2020, which is just under last year’s 5.2%. Domestic demand will be the biggest driver of the economy. Rising incomes coupled with job growth and election-related spending are underpinning private consumption growth, which we forecast will be stable at 5.1%. Additionally, Atradius experts believe that if Widodo in his second term can build a more efficient administration and tackle corruption, real GDP growth could be closer to 7%.

Meanwhile, a sharp decline in the imports of raw materials and capital goods since end-2018 are signs that investment growth will slow later this year. But government efforts to encourage more private investment (both domestic and foreign) in infrastructure and manufacturing probably will provide support to capital formation in the coming years. Infrastructure development in particular has been one of the key policies of the incumbent government with President Widodo pledging to build US$350 billion of infrastructure projects during his current term.4 Jakarta has also recently signalled that it is open to receiving more infrastructure investment through China’s Belt and Road Initiative.5

Looking at export growth, the slowdown that started in 2018 has continued into this year, and the short-term outlook for exports remains weak as China demand continues to soften and prices for commodities and manufacturing move lower. Additionally, a recent decision by the European Commission (EC) to classify biofuels derived from palm oil — a major Indonesian export — as unsustainable and ban related subsidies could lead to a steep fall in, and eventual demise of, demand for the fuel. This, in turn, could dent palm oil exports and significantly impact Indonesia's economy.6

However, exports account for just 22% of GDP, which makes Indonesia less susceptible to global trade downturns than some other Southeast Asian countries. In any case, we believe the robust domestic sector would moderate the impact.

More positively, Indonesia’s external position has improved as both foreign debt in relation to exports of goods and services and the relatively high debt service ratio continue to decrease, reducing the country’s dependence on foreign capital. However, the fact that 40% of Indonesia’s government bonds are held by foreigners makes the rupiah more vulnerable to higher interest rates in the US than other Asian currencies as the country remains susceptible to outflows. For the moment there is less pressure on Bank Indonesia as the US Federal Reserve has signalled that it is unlikely to raise interest rates this year.7

And while this is not our baseline scenario, downside risks to the economy in the next two years could include an unexpectedly large slowdown in the growth of the Chinese economy, a full-blown trade war and increasing financial markets turmoil.

Looking further ahead, we believe solid consumer spending prospects combined with favourable demographics and gradual improvement in exports will sustain growth. With our global footprint and access to credit information of millions of companies, we can help by equipping you with the information crucial to protect your business from credit risks so you can focus on what matters and trade with confidence in one of Southeast Asia’s biggest markets.

From navigating trade talks with the US to deleveraging indebted state-owned enterprises, China faces a number of downside risks in 2019.