Due to economic stagnation, political uncertainty and tighter credit conditions business insolvencies are forecast to increase by more than 5% in 2019. 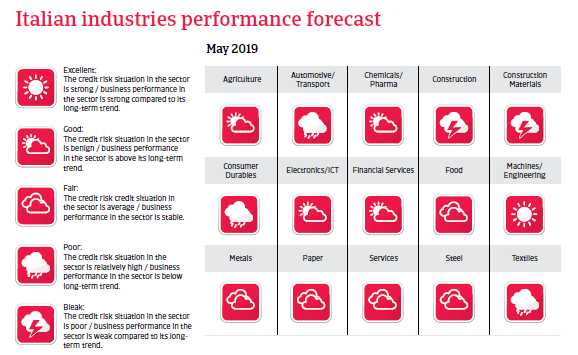 In line with Italy´s economic rebound over past years, corporate insolvencies registered annual declines between 2015 and 2018, but the number of insolvencies remained much higher than in 2008 (7,500 cases).

Due to economic stagnation, increased political uncertainty and tighter credit conditions it is expected that business insolvencies will increase again in 2019, by about 6%. Liquidity problems of Italian businesses are still exacerbated by continuing poor payment behaviour, especially by the public sector. With the exception of the food and chemicals sector, payment duration in other key sectors remains very long (90-120 days), putting strain on the financials of mainly smaller suppliers. 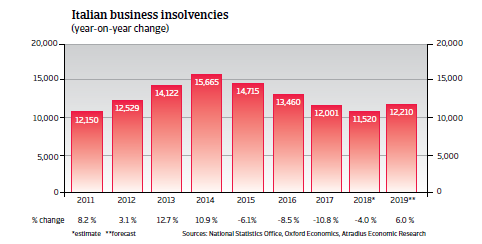 The economy has entered recession

After a modest rebound seen over the past two years Italy entered recession in H2 of 2018, and zero GDP growth is forecast for 2019, mainly due to subdued domestic demand. Private consumption is expected to remain weak, while fixed investments and industrial production are forecast to contract this year.

While the state of the Italian banking sector has improved since 2017 due to certain government actions (e.g. recapitalisation), many banks still suffer from non-performing loans, high operating costs and low profitability.

Previous reform efforts have been insufficient to boost higher growth rates, and Italy´s competitiveness has not significantly improved compared to its EU peers. The new government has even withdrawn some key reforms.

Confidence in public finances is weak, as due to increased public spending the fiscal deficit is expected to increase more than 2.5% in 2019 and 2020, with the overly high government debt-to-GDP ratio rising further.

The global economy is losing steam in 2019 and 2020. Ongoing uncertainty regarding the trade war continues to cloud the outlook.

Despite a significant decrease in 2018, at 74 days, the average DSO reported by survey respondents in Italy remains the highest in Western Europe.

Besides the low spending capacity, ongoing tight lending conditions set by banks remain one of the main reasons for the subdued sector performance.