Despite improvements, the vast majority of respondents in Singapore reported frequent late payments by their B2B customers.

Despite improvements, the vast majority of respondents in Singapore reported frequent late payments by their B2B customers.

Singapore is the only country surveyed in Asia Pacific in which sales on credit terms did not decrease in 2018. Respondents here reported a faster invoice to cash turnaround as a result of shorter payment terms and decreased payment delays. However, despite improvements, the vast majority of respondents reported frequent late payments by their B2B customers. The need to correct cash flow and to pursue additional financing were some major consequences of overdue B2B invoices. 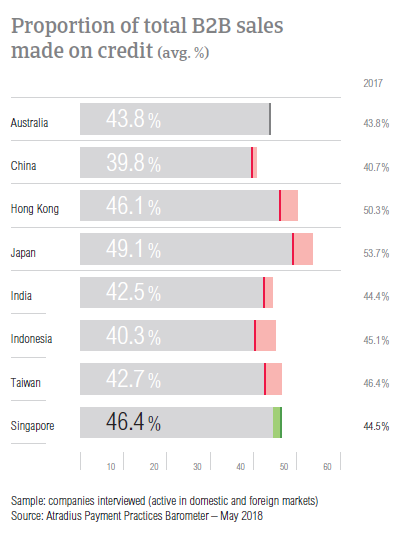 After a steep decrease from 54.5% in 2016 to 44.5% in 2017, the average proportion of B2B sales made on credit increased again this year to 46.4%. Unlike other Asia Pacific countries surveyed, Singapore is the only one in which an increase in sales on credit terms was seen.

When asked why they opted for trade credit, respondents in Singapore mentioned the same reasons in regards to both their domestic and foreign B2B customers: credit sales are common practice, it is important to nurture business relationships and develop new ones and it is more convenient to trade on credit.

We trade on credit because this is the usual way in Singapore.

Looking at reasons why they would refuse to grant credit terms to their domestic B2B customers, 50% of respondents mentioned the customer’s poor payment behaviour, 25% a lack of information on their customers’ business and payment performance and 25% high economic or political risk. This latter was also the top reason why respondents would refrain from offering credit terms to B2B customers abroad (mentioned by 68.2%). Another frequent reason for not selling on credit with B2B customers abroad is high currency risk (mentioned by 40.9%).

It is more convenient to pay for our business services using credit than any other payment methods and we have trust in our customers to make prompt payment.

The average frequency of late payment dropped to 91.1% from 93.6% in 2017. This is the third consecutive year with a decrease. Still, Singapore remains one of the countries where the vast majority of respondents reported being impacted by payment delays. Among the Asia Pacific countries surveyed, only India had a higher percentage.

On average, 38.4% of invoices are paid late. This reflects a decrease from 44.9% in 2017 and is one of the lowest percentages of overdue B2B invoices in Asia Pacific.

In 2018, the average Days Sales Outstanding (DSO) figure recorded in Singapore is 42 days, one day longer than in 2017. Most respondents in Singapore (56.4%) do not expect any changes in their company's DSO over the coming 12 months. Of those who foresee a change, 24.9% expect a slight increase and 13.7% a slight decrease.

The fastest invoice to cash turnaround in Asia Pacific

According to the survey findings, payment delays in Singapore have decreased significantly in 2018. A 10 day decrease was reported in regards to domestic B2B customers (who delayed payments, on average 14 days) and a four day decrease in respect to B2B customers abroad (on average, 16 days). 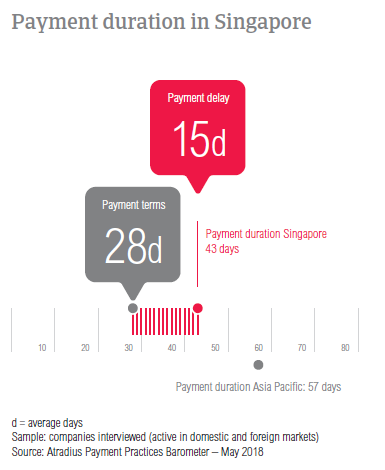 As a result of shorter payment terms and decreased payment delays, Singapore’s average payment duration dropped from 46 days in 2017 to 43 days this year. In 2018, Singapore is the country in which it takes the shortest time to convert B2B invoices into cash; two weeks less than what was reported at regional level.

In Singapore, domestic payment delays occurred mainly because of insufficient availability of funds  and the buyer using outstanding invoices as a form of financing. The first reason was cited by 41.5% of respondents while the latter by 33.3%. Payment delays from B2B customers abroad occurred most often because of the inefficiencies of the banking system and the complexity of the payment procedure (mentioned by 37.4% and 34.2% of respondents respectively).

Asked about the impact of overdue B2B invoices over the past 12 months, 27.5% of respondents said that this was not significant. However, 26.4% said that they needed to take specific measures to correct cash flow and 19.7% that they needed to pursue additional financing. For 16.6% of suppliers in the country, overdue B2B invoices led to revenue loss.

E-invoicing: used by the majority of respondents

Asked about the effect of e-invoicing on payment duration, the majority (57.8%) believe that after invoicing electronically, they received payments quicker. In contrast, 7.4% said that they have experienced a slowdown and 34.9% that there was no noteworthy effect on payment duration.

When asked if they expect turnover changes based on trade uncertainty and global protectionist measures, 37.9% of respondents in Singapore said that they do not expect to be impacted over the coming 12 months. Of those who expect a change for the worse, 26.9% foresee a negative effect of up to 10%. A lower but notable percentage (19.8%) expect losses between 10% and 20%. Only 3% of respondents said that they expect that the developments due to protectionist measures around the globe will have a positive effect on their businesses. 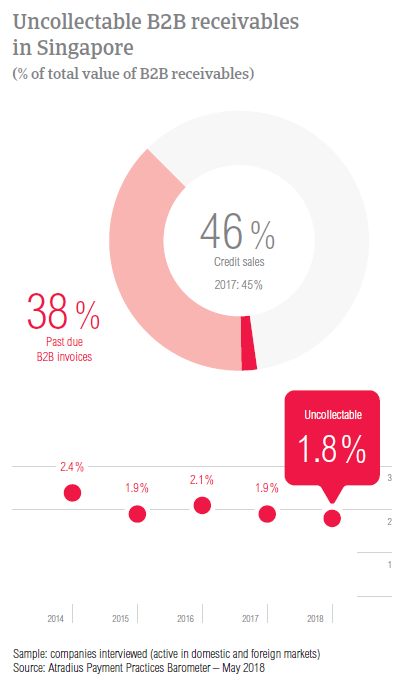 In 2018, the average proportion of uncollectable receivables in Singapore remained stable at 1.8% (1.9% in 2017). Domestic B2B receivables were written off significantly more often than foreign B2B receivables.

Uncollectable receivables originated most often from B2B customers in consumer durables, construction, business services and services. A common problem in the entire region – the customer going bankrupt or out of business – was also the main reason for write-offs in Singapore (mentioned by 45.2% of respondents). The second most frequently reported reason for write-offs is the old age of the debt, stated by 37.4% of respondents in the country.

Similarly to what was observed in 2017, B2B customers in the construction and consumer durables sectors generated some of the longest payment delays. B2B customers in these sectors, paid on average 24 and 19 days after the due date. The main reasons behind the payment delays in the construction sector are insufficient availability of funds (reported by 46% of respondents) and the buyer using outstanding invoices as a form of financing (mentioned by 43%). The same main reasons have been reported by 35% of respondents in the consumer durables sector.

Looking ahead, most respondents in Singapore (47% and 44% respectively) do not foresee any changes in the payment behaviour of their B2B customers in the construction and consumer durables sectors.

In 2018 the economic performance will be impacted by weaker demand from China and lower domestic demand due to weaker residential construction activity.

Asia Pacific: an increase in payment duration in 2018

Despite minor improvements, the impact of late payments cannot be denied and businesses in Asia Pacific need more time to convert B2B invoices into cash.